Chad Detalente of Alphahunter Tactical approached me about a project he had in mind. Chad is an ordained minister and wanted to make a knife that would exemplify and honor the Archangels Michael and Gabriel. Hence the project's name: God's Guardians

Here's a shot of some conceptual drawings. The top Bowie was an idea that we initially agreed upon. The Bowie was about 13" OAL, but after some thought we both decided that the significance and meaning of this project warranted something larger and more powerful. Thus I drew the bottom three concepts, all of which are approaching 19" OAL.

Because these will be very time/labor-intensive I decided to only make two of these for our first run. It also seems fitting in light of the two Archangels that we are honoring. I'll be making the bottom two recurves in the above photo. They are the same exepting the guard. The only change I made to the above concepts was to greatly increase the size of the pommel. This will allow for a more secure grip as well as improved balance and likely a more ideal center of percussion.

For the steel I'm using 1075. This is a simple high-carbon steel that is very tough and will hopefully produce some vivid hamons for us. I'm using .350" thick stock, but I'll be grinding them with a very pronounced distal taper so they'll be quick in the hand.

Here are the final versions of the pattern cut out and ready to be glued to the sheet of 1075. When I'm designing a new pattern, I always sight down the blade from butt-to-tip and from tip-to-butt. I do this to make sure everything is nice and curvy. I make it a point not to have straight lines on my knives, with the exception of the edge on a wharncliffe-style blade.
"Curves speak of life to those who will hear" - Ed Fowler Since I'm unable to make long cuts with my portabandsaw I use the angle grinder with a cut-off disc. After the two knives are separated I move to the KMG, put a 36-grit Cubitron on the 10" wheel, and go to town.

Before I could finish profiling them I caught a piece of steel in the right eye. My wife helped me flush it out and all is well, but I figured it was time to call it a day. Here is how they sit right now.

My eye is good and I'm grinding again today. It's amazing how a piece of steel/grit can makes its way around a respirator, eye pro, and ball cap

Refining the profile right now. They're already coming alive. Not many knives begin to feel alive this early in the process.

Once I get them to their final shape, I clean up the perimeter to 65 microns. The sheet of 1075 these were cut from was warped something terrible. Before I start drilling holes I need to get them nice and straight. Then it's time to start working on the flats. First some good old-fashioned draw filing.

Then some hand-sanding with my xtra-fancy sanding block.

Time to layout where I want to drill holes. I'm also drilling a Popov/Hatcher collab that I'm making with my good friend Dmitriy. After drilling and chamfering holes I go back to the sanding station and bring both knives to 400-grit.

Next I mark the edges with a black Sharpie, lay the knives on my granite table top, and use an 11/32 drill bit to scribe my center lines.

And then it's go time.

I left the edge thick, about .070". After heat treat, I'll bring the edge down to about .030 or so, push the plunge back a bit, and distally taper the blade. After that I'll grind the clip and begin working on the scales.

First I use an old belt to break the hard 90 of the edge.

"Once more unto the breach, dear friends, once more." And a vid of a couple of passes:

And here they are, ready for HT. I'm planning to grind a few more knives to accompany them on their trip to Peters for clay heat/cryo treating. Back from heat treat!

Laying out the materials. Gotta get everything flat and mating surfaces fitted.

The dyed maple scales were much smaller than I like for my usual fabrication method. The result is I had to get pretty creative with the clamps. Fortunately I have back-up material in the event that these don't set-up properly. But it appears they bonded well. Here they are after flattening. Now to work on the blades! But before any grinding could be done I first had to correct some warpage. Here's a shot of one of them shimmed and clamped before going into the oven for a tempering cycle.

It took several straightening cycles and a bit of finessing with a mallet, but I was able to get both straight. The first grinding operation was to taper the tangs.

After cleaning up the flats it was time to finish grinding the bevels . . . And repeat the process with the guard version.

Then it was time to grind the clips. In the past I've always ground Bowie-style clips legthwise on a wheel. But for these I decide to use the platen. I rarely use layout lines when grinding, but since this was my first time grinding a clip on the platen I thought it would be prudent.

After grinding I clean them up with EDM stones before finally hand sanding them to 400 grit.

Time to work on fitting the scales! This was my first time using bolstered scales on a tapered tang. In this shot one scale has been drilled through and I'm lining up both scales on the tang so I can use the first as a template to drill through the second.

After drilling the scales are roughly shaped with the bandsaw and grinder. Then they're dry-pinned to their respective tang.

Brought flush and taken to 400-grit using the 1" small wheel on the grinder.

Now it's time to start shaping the handle. I use the 10" wheel with 36-grit and then 60-grit belts to rough out hollows to create the palm swell effect.

I then use the 2" wheel to further refine the shape before switching to slack scalloped belts to blend the various facets. This is what I have before final hand shaping.

I begin hand shaping with 60-grit paper and take the handles up to 400-grit. While shaping the handles I also clean up the perimeter of the tang and spine.

I pull the scales and use nonwoven attachments in the Dremel to break any sharp corners that the user's hand may come in contact with.

Now it's time to start working on the final finish. Both of these will have etched & polished hamons, which is an extremely time and labor intensive process. First I clean up the flats/ricasso to a soft 800-grit finish. I get this effect by using a piece of 50 durometer rubber between my sanding block and abrasive. This will create a nice contrast to the soon-to-be-polished bevels. Then I begin hand sanding the bevels. It took me four hours to take one side of one knife from 400-grit to 1500-grit. Repeat three more times and that's sixteen hours of hand-sanding just to get me to the point where I can begin the etch/polish process. For the hamon process I use white vinegar mixed with a few drops of dish soap and heated in the microwave. The dish soap helps break the surface tension so vinegar is less likely to bead up on the steel. The heat simply speeds up the etching process. I clean the blade thoroughly to remove any oils and then flood the surface of the steel with the warm vinegar using a wadded up paper towel. I spend about 10 minutes constantly rubbing both side of the blade with fresh vinegar.

I then mix a concoction of Flitz polishing liquid with some old Outers polishing compound, Mobil 1 motor oil, and WD40. There are no rules here. I usually use a different concoction evertime just to see what kind of affects I get. I use my fingers to vigorously rub the mixture on the blade, which removes the oxides from the etch. It takes several cycles of this . . . etch/polish, etch/polish, etch/polish. I lost count how many times but it generally takes me anywhere from 10-12 hours of work on such a big blade before I'm happy with the results. For the last couple of polishing cycles I sometimes like to switch to a mixture of WD40 and Bar Keepers Friend. Next, I clean up any inadvertent etching of the ricasso/flats in preparation for the Alphahunter Lion logo. 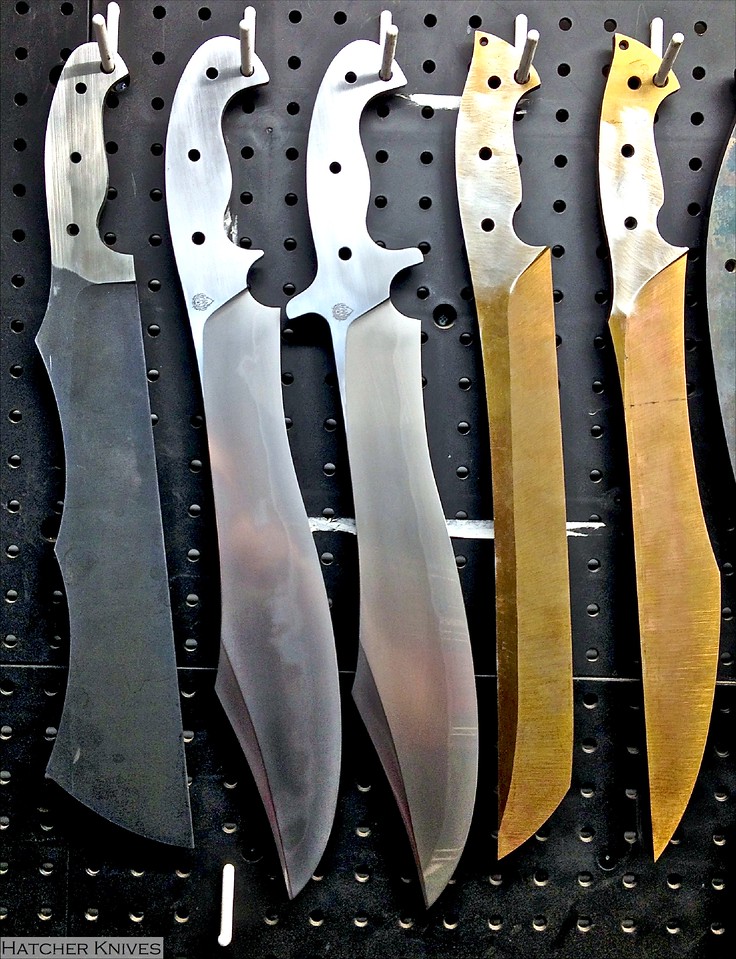 The tangs, scales, and carbon fiber pins & tubes are prepared for epoxy.  I've covered the blades with plastic wrap & tape to protect the polished hamons while finishing the handles. I allow the West System's G/flex epoxy to cure overnight.  Then the carbon fiber pins & lanyard tubes are brought flush with the scales.  I then bring the scales to 1500-grit and give them a tung oil finish.

The knives are sharpened and then given a thorough going-over before finally coating them with Renaissance Wax.

You can see more photos and specifications here:  God's Guardians